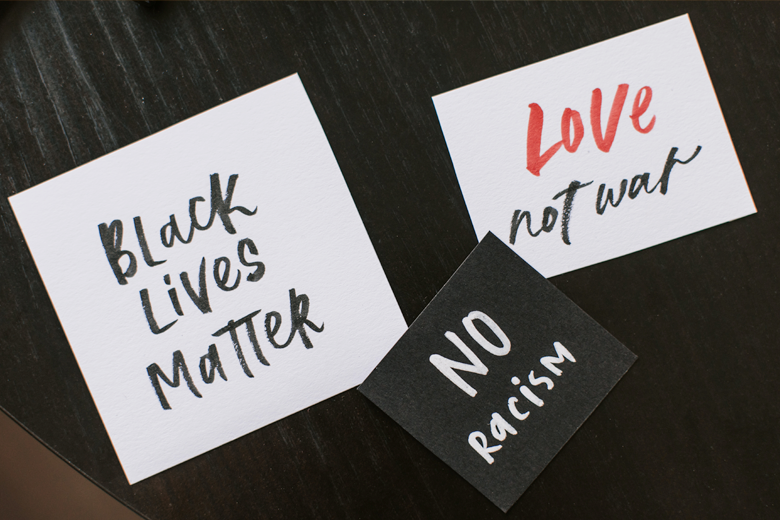 As if a global pandemic wasn’t enough, this week the President of the United States co-opted sacred space for political antics and partisan pandering while jeopardizing lives and using the military as props in an ongoing drama that has turned into America’s nightmare. On Monday, military police were asked to unleash tear gas, rubber bullets and other weaponry on peaceful protesters at Lafayette Park across from the White House—an undeniable show of force all for the President to pose for a photo-op in front of a church, Bible in hand. It was an outrageous scene—unequivocally not Christian. All Christians should hold the President accountable for gratuitously violating sacred Christian symbols for political gain.

I imagine that Jesus was turn-the-tables-over-in-the-temple angry at what transpired in front of St. John’s Church. A church. The place where there is sanctuary from the burdens of the world. The place where we find peace and refuge for our troubled souls. The place where we rejoice and give thanks, marry and nurture children in the faith and say our last goodbyes to loved ones. Churches are not meant to be used for political grandstanding in response to protesters demanding justice for an unarmed, handcuffed Black man whose life was snuffed out by those sworn to protect and serve. My house shall be called a house of prayer; but you are making it a den of robbers (Matthew 21:13). Those are the words of Jesus. Found in the Bible that was on display but not being honored. You see, George Floyd’s life was stolen from him, a church was robbed of its sacred space, and God’s people were robbed of their dignity and right to stand up and speak out. The sanctity of the lives of the protesters was callously disregarded for a publicity stunt gone wrong.

How will we recover from this?

At a moment in our nation’s history when there is a desperate need for leadership and healing, the person with the title and position most able to deliver both instead decides to further divide us while putting Americans in harm’s way and defiling sacred space. Surely, we have reached a new low where there is no bottom.

Sadly, that is not all. Amid the global crisis of COVID-19 is a parallel and equally deadly pandemic—racism. While we were equipping ourselves with masks and gloves, socially distancing and washing our hands profusely to ward off the coronavirus, we never properly geared up for another round of racial incidents. And, now our nation is at a tipping point.

In the past few months, the coronavirus has wreaked havoc claiming more than 105,000 lives and literally suffocating the people of color most affected by it. Racism has had a stranglehold on this nation, inflicting pain and suffering on millions of African Americans and hindering them from living for hundreds of years. As we take an inventory of racial hatred and discrimination in this country, we have to conclude that America is the host of a virus called racism and it can be found in every cell in the body that makes up American systems. Whether it’s the disparities found in the global health crisis or in trying to go about every day normal activities such as jogging or sleeping in one’s own bed, or in daily interactions with police and their self-appointed surrogates, racism and white supremacy intubate the lives of Black people in our nation. No, we cannot breathe.

How do we recover from this?

The disparities revealed in the health crisis, economic uncertainty, and the frustration from sheltering-in-place, followed by several high profile senseless deaths of African Americans—Ahmaud Arbery, Breonna Taylor, and George Floyd—has spilled over into the streets and landed us where we now find ourselves.  We are a nation devoid of leadership left watching social upheaval unfold like nothing we’ve seen in generations. Apparently, this moment has also given license for some to debase that which is sacred and holy. We are teetering on the edge of imploding.

Our nation’s irreverence and disregard for Black lives, for human life, cannot be tolerated. Let’s find a vaccine for that. How do we recover from this?

“Do nothing from selfish ambition or conceit, but in humility regard others as better than yourselves. Let each of you look not to your own interests, but to the interests of others. Let the same mind be in you that was in Christ Jesus.” Philippians 2:3-5

When You Don’t Know What to Say.